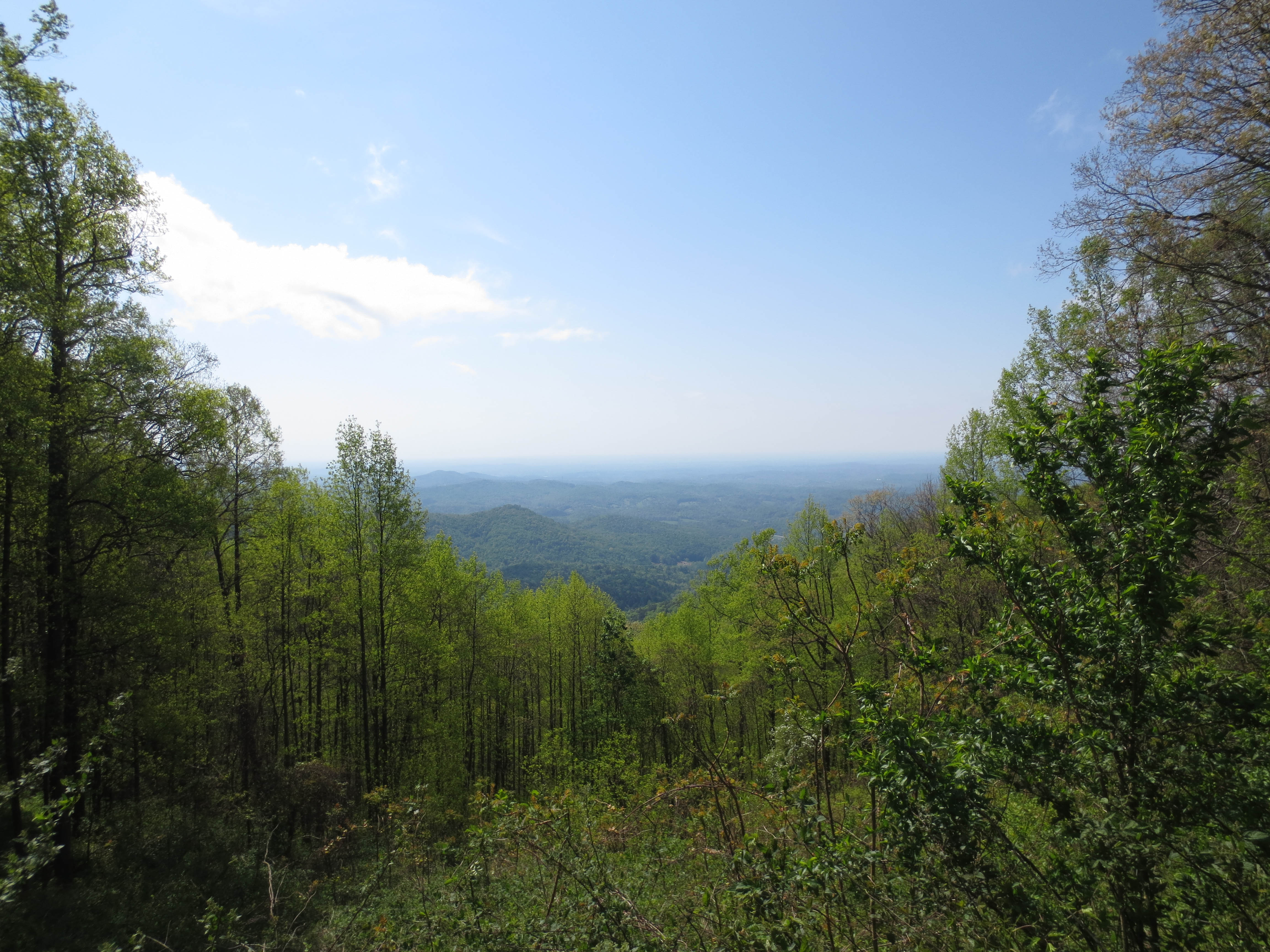 “P.U.D.s, that’s what I like to call it”, says Gram Man from Ohio, as he squeezes his water filter for the last drop. “Pointless ups and downs, that is.” We are on the Appalachian Trail (A.T.). 2181 miles from Georgia to Maine, passing 14 states, two national parks, breathtaking mountain ridges, deep green woods and some of the most beautiful scenery of the United States. But for us, today, it just feels like a lot of pointless ups and downs. The A.T. seems to take every peak and hill it can find on the way to Maine, and we’re only three days in, 43 miles, sitting at a camp fire at the Low Gap Shelter, and we are tired from all those climbs. For 50 year old Gram Man, it is almost over, he is only hiking the A.T. for a couple of days. I will be hiking for 4 weeks, but some of us, like my brother Ralph, or like Dan and Alex from Detroit, they are in for the whole thing. Although they don’t like to say that, “hiking the whole trail”, they rather say “I am attempting to hike it”. Because it is hard. And from the 1500 to 2000 thru-hikers every year, not even half of it will finish it. 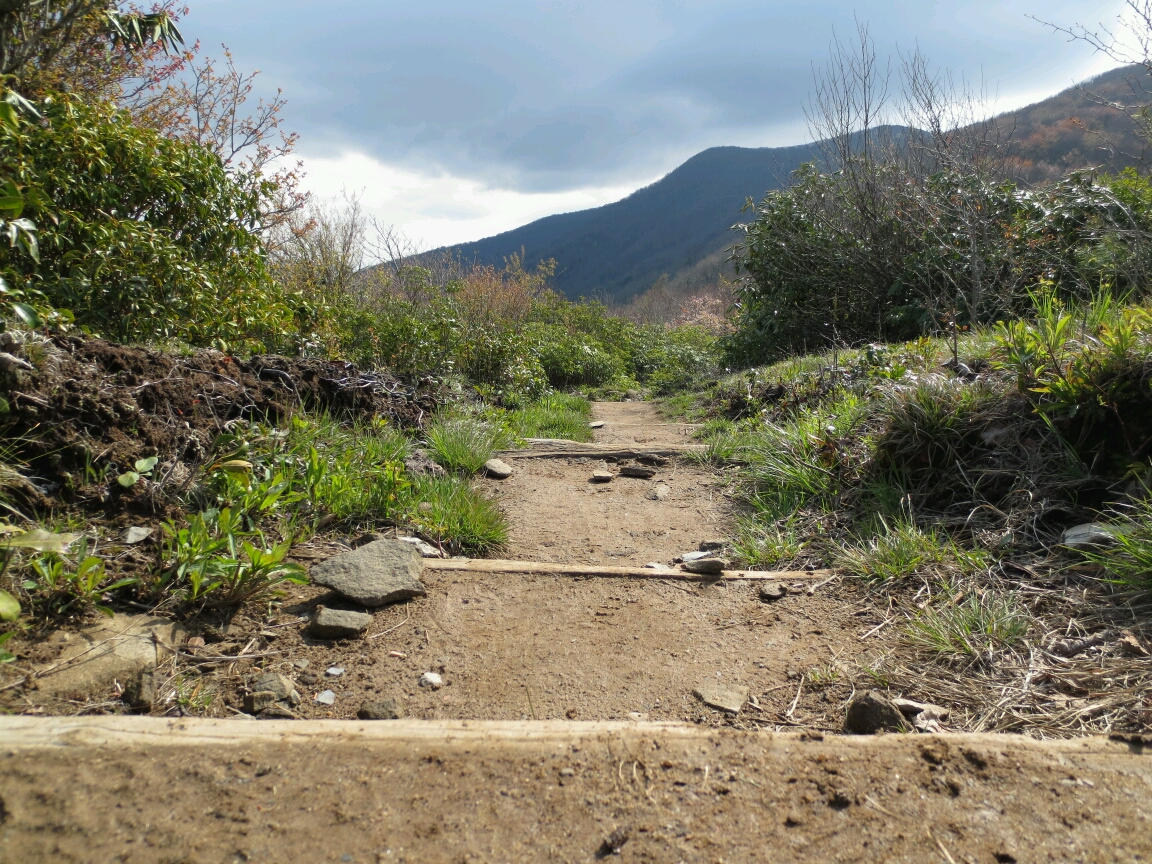 But we’ve been doing good so far. 43 miles in 3 days, that certainly is something, and the statistics tell us, that 25 percent of all thru-hikers have already dropped out at Neel Gap, which we passed yesterday. But we are still on our way. Some people start the trail with 50 to 60 pounds backpacks, never hiked before, and then realize after a couple of miles, that it’s not what they expected. Some hurt their ankles or knees on the first day. We hear from a guy, who stopped only after half a mile, not even at the starting point, Mount Springer, put down his pack and said: “That’s it for me”. People had to help getting his pack back to the parking lot.

It’s not what we’ve expected either, that’s for sure, but at least we are ready for it, have trained for it, and took only the most important things with us. Our packs weigh about 32 pounds, water and food included. We are travelling lighter, because we counted every gram in our pack. That is how Gram Man got his trail name “Gram Man” – but I guess, this name could apply to many of us. “At the end, I got a little loose, took a couple of things with me I didn’t necessarily need, but all together, I got it down pretty nicely”, says Gram Man as we all sit at the camp fire now, eating Ramen noodles, freeze dried meals or other hiker food. There are some people on the trail with 20 to 25 pound packs, who use only light tarps for sleeping and use light trail runners as shoes. We chose to have a little more comfort, bigger sleeping packs, a second pair of socks, even a Kindle to read on. And we tend to take a little more water with us than we really need, because you never want to run out of water. That is how Gram Man’s hiker buddy Camel earned his trail name. When everyone else run out of water, he always had some left. But today, we all are good on water, are fed, and when we turn off our lights and head for our tents and the shelter, life is good in the middle of the wood. 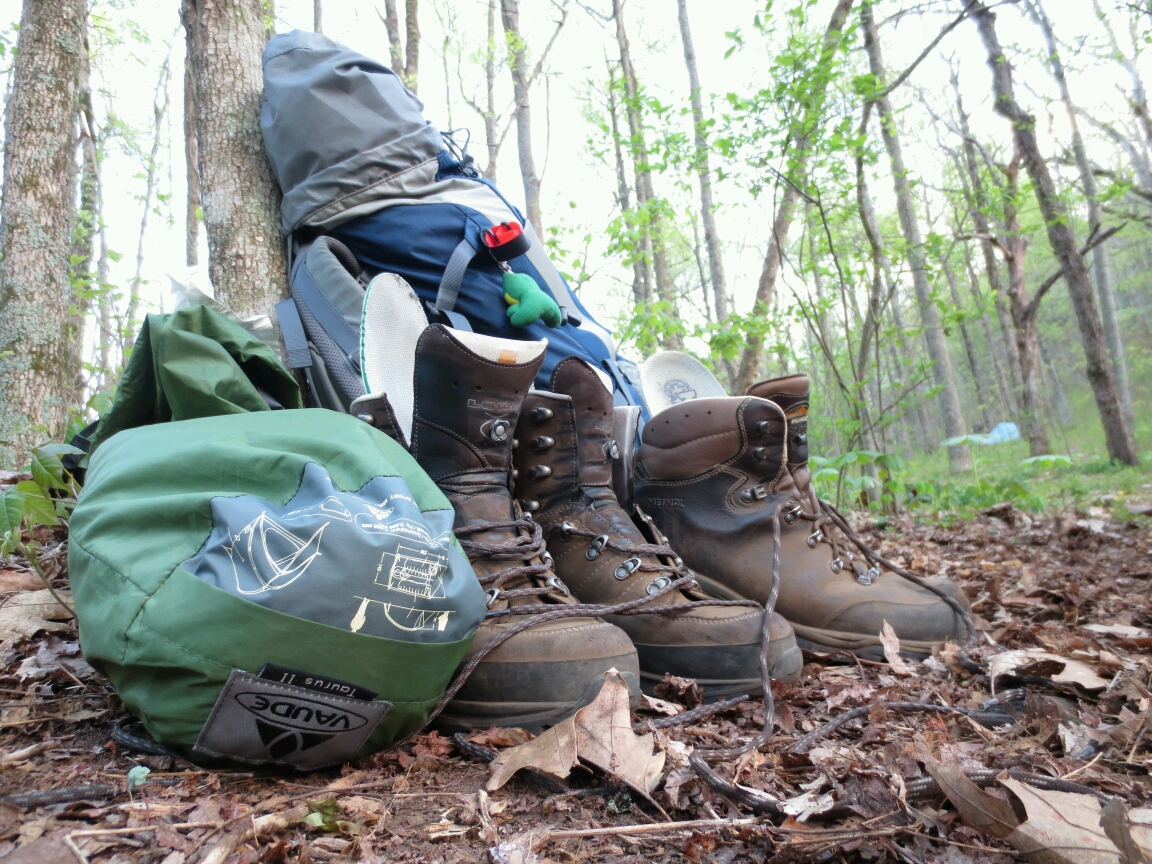 We leave early around 8 am the next day, heading for Tray Mountain Shelter. From there, we plan to get to Hiawassee a day after that. Hiawassee is a little town 11 miles away from the trail. We plan to hitchhike there, to get some resupply, do our laundry, rest our feet, sleep in a real bed. We hike with Randy now, a really nice 30-some year old guy, who just got the same pace on the trail as we have. He only plans to hike for two more days, going back to work after that. He is a section hiker like me, and he wants to do the whole trail piece by piece, week by week, coming back every now and then.

We are only a couple of miles in, when Randy slows down. “It’s my knee”, he says. He didn’t have any problems the whole time, but now, suddenly, the knee aches. Some people have problems with blisters, some with the shoulders, but we will hear from many along the way, that it’s the knees that cause the most troubles. I give him my knee bandage, which I took with me just in case, since I had knee surgery last year, and he keeps on walking with that, slower, but keeping up with us. After another hour, it starts raining, and as we head for the next shelter for a little lunch break, we meet Camel and Gram Man again. “We are heading for Unicoi Gap, that’s where we leave the A.T.”, says Gram Man, “It’s just a mile from here”. At Unicoi Gap, Camel’s car is waiting for him, waiting for him to bring him to Helen, GA, a very German place in the Appalachians, filled with German Restaurants and Taverns. Great German beer, they say. Randy decides to go with them. He was only go one more day anyway, and the knee just hurts to much, he says. As they leave, we pack out our lunch and enjoy the view from the mountain top, as the rain stops and the clouds move further. 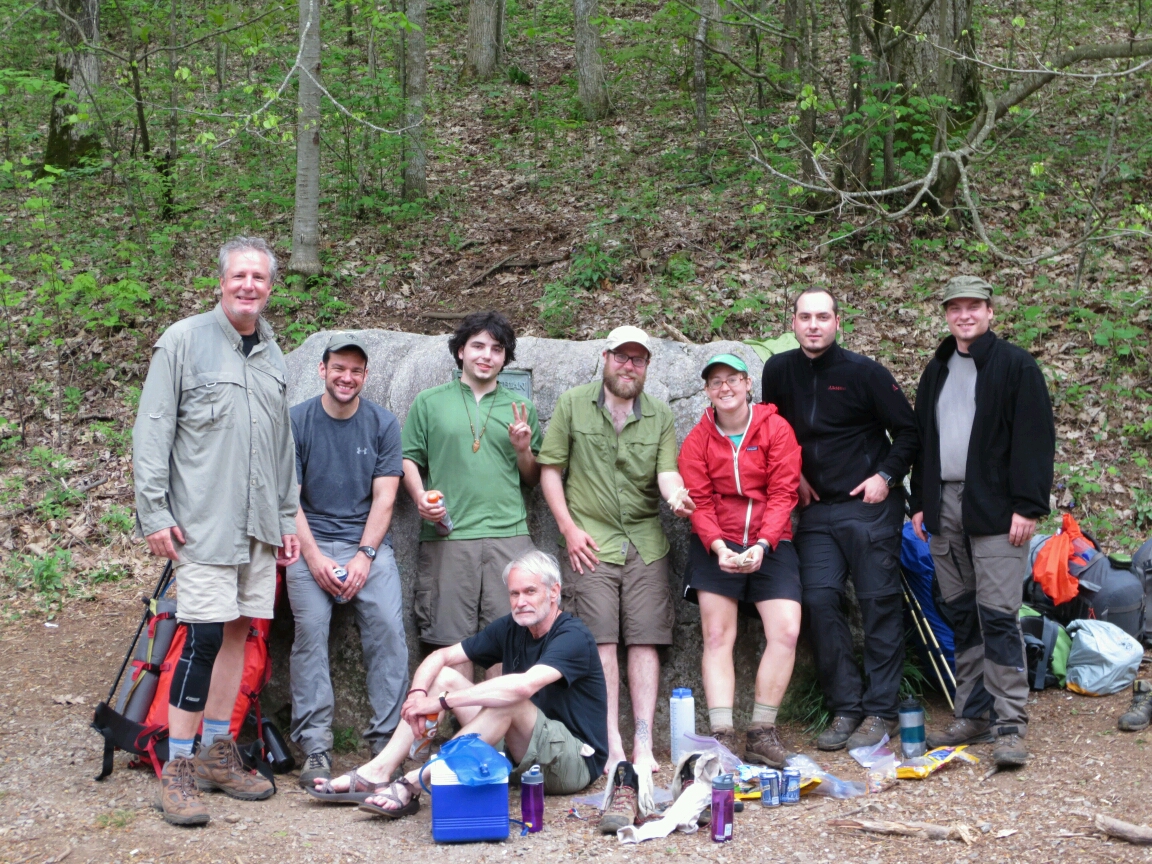 When we arrive down at Unicoi Gap an hour later, Camel, Gram Man and Randy are still there, and also Dan and Alex from Detroit. Camel hands us his last food supplies (“won’t need those dried-frozen meals in Helen”) and a cold beer out of his cooling box. When churches or former thru-hikers come up to the trail to feed the hungry hikers, or put up a BBQ along the way to Maine, people call that “Trail Magic”. Today, here at the parking lot, that cold beer and the extra food we get, that is “trail magic” to us. As we say our goodbyes to Camel, Gram Man and Randy, we all take a picture together and be on our way, heading for the Hiawassee. “We all think of you when we have a German beer in Helen”, shouts Gram Man, as my brother and me head back to the trail, to climb another pointless up and down.

Please check your feed, the data was entered incorrectly.